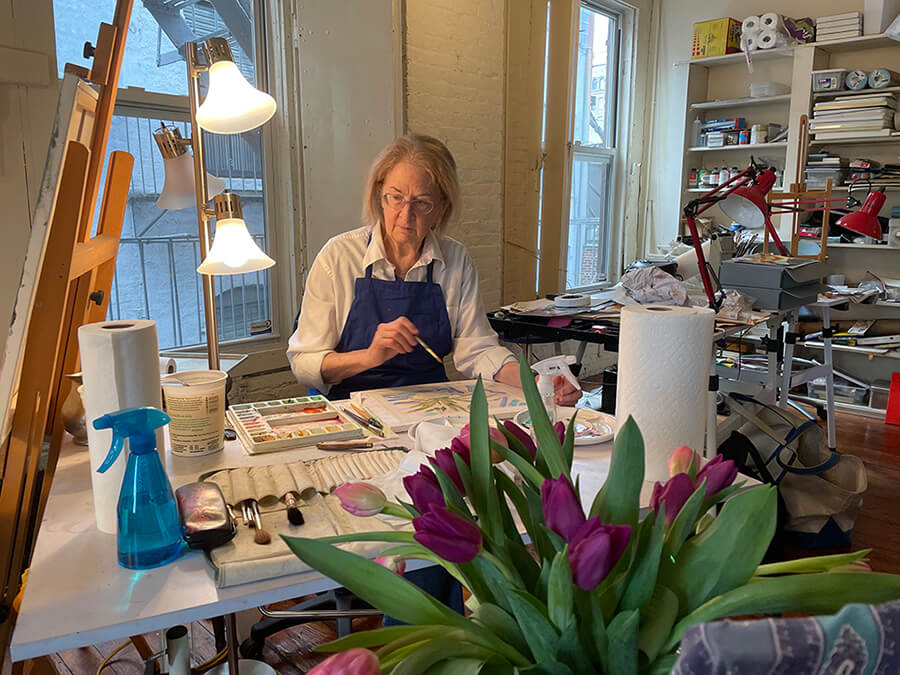 Holder of academic degrees in art history from Oberlin College (BA), the Institute of Fine Arts of New York University (MA) and Columbia University (PhD), Annie Shaver-Crandell is an internationally published medieval art historian and Professor Emeritus from The City College of New York. During this first career, she taught the history of art for over three decades, published in 1982 The Middle Ages, in the Cambridge Introduction to the History of Art series (translated into seven languages) and co-authored, with Paula Gerson and Alison Stones, The Pilgrim’s Guide to Santiago de Compostela: A Gazetteer, published in 1995. Additionally, she has worked extensively to further the status of women in the visual arts professions, serving from 1986 to 1988 as National President of the Women’s Caucus for Art.

In her second career, as a visual artist – first as a designer of large-scale abstractions in fabric, now more as a figurative painter and printmaker, she lives, works, and teaches at her studio in Manhattan’s NoHo district. In this phase of her professional life, she is also active in the Salmagundi Club of New York, including having recently served for ten years on its Board of Directors.

Shaver-Crandell’s plein air work reflects both her local environment – the parks and community gardens of Manhattan – and those she has traveled to, including the American Rockies, the Delaware River, the north shore of Long Island, the Provence region of France, and Italy. Annie is attracted to boundaries -- the garden wall, the water's edge, the place where the cultivated field, pasture, vineyard or orchard gives way to the woods or hills.

In her studio, where light and climate can be controlled, Shaver-Crandell often turns to floral still lifes. These indoor pieces are frequently studies in color, offering richer possibilities for exploring the color spectrum than the typical landscape. This process is shared with her students, who gather weekly for classes aimed at teaching painting skills, but, more importantly, at instilling creative confidence and freedom.

Shaver-Crandell’s figurative work also includes studies of animals, either singly or in groups. As an avid dancer of Argentine tango, she is fascinated by the play of energies among beings -- whether tango partners giving close attention to each other and the music that animates their movements, or the ways that herds will group themselves in a pasture or on a city street.